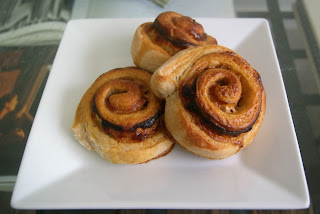 It's Secret Recipe Club time again. I haven't been updating nearly as much as I've wanted to lately because life has just been out of control. We went on vacation and we've spent the last few weeks just trying to get life back in order. Life is just going to get even crazier over the next few months with moving and grad school starting for my husband, but it's going to be a wonderful new adventure for the both of us.

This month, I had the blog Troyers Loving Life by Kirsten, a wife and mother living in Washington State. Kirsten has a great collection of recipes but also a few wonderful posts on inspiration and living life with intention. This has been a challenging week in my life with family, friends, money, etc. I know it's all in my head mostly (my husband says I worry too much) but I truly needed to read her post about living with intention in 2016 and doing things to take care of myself. The one that struck me the most was:   "Do more things that I love, even if I have to do them alone" I've never been good at doing things alone. My family always told me that going to the movies or going to meals alone was just something you didn't do, so I've never done that. I'm self sufficient, but I've depended on others for so much of my happiness, that I know it's time to start taking care of myself first. I'm normally very good at that, but this week has been more challenging than most.

I opted to make Kirsten's recipe for Hot Ham a Cheese Roll-ups, an easy ham and cheese bread that sweet and savory for either breakfast, lunch or an afternoon snack. These were very tasty and super easy to make. Her recipe just called for a bread dough that she had leftover after having too much for cinnamon rolls. I wanted something a little more savory, so I used a wheat version of my Garlic Knots, but I suppose you could use any bread you want. I also purchased too little ham and cheese at the store, so I've included the ratios I would use next time.

Thanks for the wonderful recipe Kirsten!