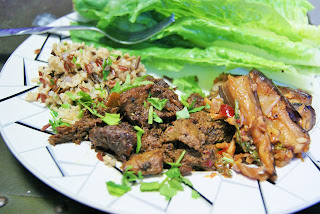 Until I made this dish, I've never had any exposure to Indonesian food. I was challenged to make to make this particular dish and the recipe did not disappoint. Apparently beef rending is one of the most well know dishes in Indonesian cuisine. It gets better as it ages (it was originally a method of preserving food), it's easy and it's super delicious. I mean, you're essentially making beef confit using the fat from coconut milk. What's not to love about it?

This is a weekend food since it does take about 4 hours to make. I recommend making it on a weeknight while making other dinner. Since it is better the next day, you can very easily make this on a Wednesday and box it up for Thursday night.