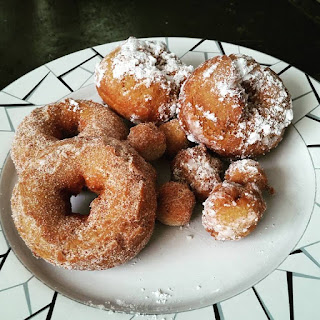 A few years ago, I started participating in something called "Sourdough Surprises". It was a little group of bloggers who tried to do interesting things with their sourdough starter. It was a fun experiment, but there wasn't any commitment. You could participate when you wanted to in the month's that interested you. If it didn't work out in your schedule, that was ok too.

When I'm not held to strict rules, I'm not very good at following through with things. I only participated in a few projects and this month, I found out that Sourdough surprises is ending in December 2015. I knew I had to do these last two months, revive my starter and make something new.

This month, Sourdough surprises had the them of doughnuts. I love doughnuts (who doesn't?) I should clarify, I love doughnut from independent doughnut shops like I had in my neighborhood when I grew up. They were the kind of places that had the best apple fritters. My dad still goes to one where they know he comes on Thursdays and he doesn't like glazed filled doughnuts, so they'll make a half dozen lemon filled doughnuts with powdered sugar just for him. It wasn't any of this Krispy Kreme/Dunkin Doughnuts nonsense. It's real people making real food and that's how I love it.

I like apple fritters, but those were always my mother's favorite. My favorite were always the buttermilk cake doughnuts with maple glaze.  These aren't quite like that, but they combine the best aspects of cake doughnuts and yeasted doughnuts. I did some with powdered sugar and some with cinnamon sugar, but the cinnamon sugar ones were far superior. This recipe was from Under the High Chair and it is fantastic.

Note: the holes are star shaped because I don't have any small round cutters :-)