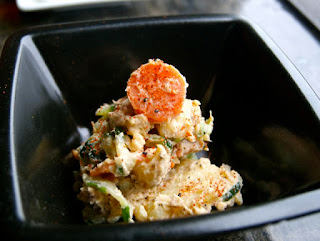 It's summer time. It's time for picnics and bbqs. It's time for cold beers and short shorts. Even though the cicadas will soon be out, it's still one of my favorite times of year.

I never really liked potato salad, but I always liked this style recipe. It's a slightly different take, using japanese quick pickles instead of relish, and using kewpie mayonaise. Kewpie is a slightly sweet Japanese mayonaise. (The three cultures that like mayonaise most in the world are the Dutch, Americans, and the Japanese).

Potato salad is one of those foods that you can't provide a recipe for. Everyone prefers it a particular way: more or less salt, more or less mayo, soft or firm potatoes, etc. What I give is just a suggestion of how I enjoy it.

Note: a more expensive version uses mentaiko (spicy cod roe), which is great. In that case, I would omit the bacon.