Tomatillo Salsa: an intro to canning 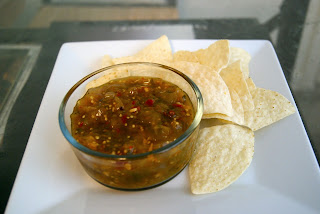 I want to introduce my lovely readers to the concept of canning, which is not nearly as difficult as everyone makes it sound. All you need is a large pot, some mason jars, and a lot of something you want to preserve. It's a great way to save those end of season vegetables for use later. Even if you don't have a garden, you can get a lot of awesome things at the farmers market and make things just because they sound delicious.

First, this recipe (and most of my canning recipes) comes from the Ball Home Preserving book. It's awesome and gives really great advice

There are a few things to know about canning:

FIRST, boil the jars, lids and bands before adding anything to them. This sanitizes them and prevents the jars from breaking when you add hot liquid. The book says you don't need to fully boil them, but what can it hurt?

SECOND, pay attention to the time. It won't make much of a difference with salsa, but with jam or pickled vegetables cooking time is very important

THIRD, hot jars should never be placed directly on a surface like the kitchen counter. The temperature difference can cause the glass to break. Always place hot jars on a kitchen towel

FOURTH, if the button is still up the next day (the button that makes the popping noise on the lid) then it did not seal properly. It won't have the shelf life of normal canned goods.

The most important thing: be very careful when taking jars out of the water. I use a combination of tongs and a large spoon to put jars in and out of the pot, but I've dropped/broken jars before that way. It can be tricky, but they do sell jar lifters, if you are interested in that

Note: The salsa will taste very sour at first, but it mellows out given time in the jar and chilled in the refrigerator. I added a little honey and more salt while it boiled to counterbalance the sour flavor. It made a spicy, slightly sweet and sour salsa, which I really liked even though it was a little different.