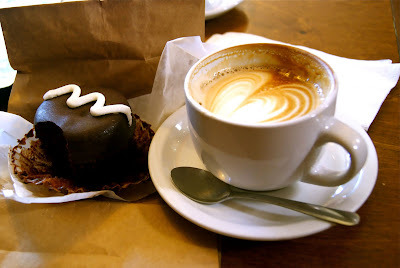 I told myself I wouldn't write any more restaurant reviews, but it occurred to me that I occasionally wanted to take a break from making food to purely enjoy food. I wanted to reflect on my life experiences and where I had been in my life. I wanted to savor the moment and create moments in my own life as opposed to simply creating moments of beauty for other people.

I've been going to Temple Coffee since I was 17 years old. It opened in 2005 at the start of my senior year of high school. I remember quite clearly that the day it opened, I had a college entrance interview and I was one of the very first customers at the 10th street location. This was back in the days when I still drank sweet, Starbucks style coffee drinks and I ordered a Mocha Thai (what I now consider to be too sweet for my taste).

I remember loving the style of the place. The interior of the 10th street location had exposed brick walls, beautiful furniture and a color scheme of brown, red and light blue. It felt comfortable, and the Swiss chalet style exterior facade still had the antique signage from the defunct Livingston Books that used to inhabit the same location.

Over the years, my tastes changed. I developed a taste for their Vietnamese coffee with condensed milk. I went through a black coffee phase and a tea phase with a specific love of their Golden Yunnan. I have recently (meaning since 2008 or so) settled on cappuccinos and cafe au laits. I have tried both the single origin espresso and the dharma blend espresso at temple and though I am normally a fan of single origin, I prefer the chocolate, honey and burgundy notes in the blend as opposed to the acidic fruity notes in the single origin.

I never thought I would give up the 10th street location, but the S street location might even be better. It feels much the same: couches and exposed brick walls and friendly service. The S street location is sadly more crowded than the downtown location, but it has parking and outdoor seating (both necessary qualities, especially in Sacramento). But the thing that has made the Midtown location special in my heart is the tabletop sketchbooks full of words, pictures, memories, and sharpie tags of ejaculating penises. It's a beautiful culmination of a community in all its imperfections. 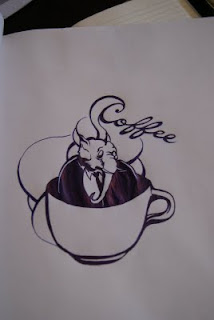 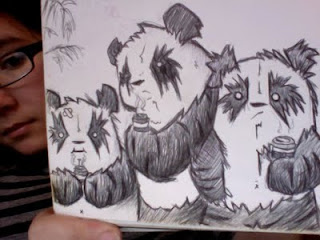 Despite all the beauty of Temple, there was always one weak spot in my mind: the food. They sold a collection of sub-par pastries including cookies, black bottom muffins and blueberry scones. The only passable pastry was the biscotti, and I always knew I had to get my baked goods elsewhere. That's where the review of Sugar Plum comes in.

Until last week, I had not known about Sugar Plum vegan bakeshop. When I last lived in Sacramento, it was a coffeeshop called "True Love Cafe" and it was located right across the street from Rick's Dessert Diner. It had a brief stint afterward as a greek restaurant when True Love closed, but I didn't hear much about it afterward.

While running errands in midtown, I happened across the old True Love location. It had the same facade at the bottom floor of a townhouse. It had the same outdoor tables, but they were all full at lunchtime and there was a chalkboard sign on the sidewalk proclaiming them a vegan/gluten free cafe. I stepped inside, hesitant.

The interior was dark but the pastry case was well lit. The cakes were not the beautiful coiffed creations of those fancy cupcake shops that have recently come into being. They were large carrot cakes topped with messy large dollops of cream cheese frosting. They looked like cakes you bake at home, not beautiful desserts from a bakery. I think that might have made me more expectant of their great quality. If you don't need the gimmick of a star tip, you must be pretty damn confident.

They seemed to offer lunch specials too like tempeh BLTs, tacos, salads, sandwiches, etc. Yet I knew I was here for a pastry to go with my coffee later. I asked for recommendations and discovered only half their selection was gluten free, but all options in the restaurant were vegan. I was throwing all my normal sensibilities out the window by ordering vegan baked goods anyway, so I figured I would go all the way and get gluten free.

I ordered the "fauxstess" cupcake: a vegan take on the snack food favorite made gluten free with a combination of garbanzo and rice flours. I was expecting an almond flour cake, but I liked that the desserts used nut free options too in order to give even further options to those with dietary restrictions. I can say the cake did not have the same moisture as almond flour cakes normally have, but it had a great nuttiness from the chickpeas. It was a more dense, dry cake, but it had a rich chocolate flavor, a great chocolate ganache and a good cream filling (even though it did not have the standard almost marshmallow fluff texture of real hostess cupcakes). The only complaint I had was that I could not have had the cake on its own. It was almost cloyingly sweet and it needed a cup of strong coffee to go with it.

It amazes me how many memories come back to me with a sip of coffee. They seem to be memories of high school, of my first boyfriend, of carefree days and feelings we once upon a time called "love". It feels so naive now, but they seemed like they mattered then. Have a sip, take a bite, and savor them for even a little while.
coffee/tea dessert gluten-free restaurant review vegan