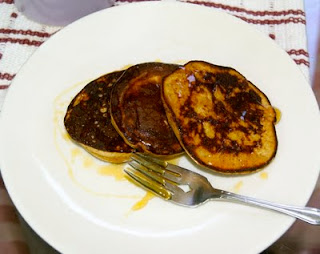 These are some of the best gluten free pancakes I've ever tried. I discovered this recipe simply because I had a container of coconut flour I had used to make a gluten free cake. Needing to use the rest of it, I've been experimenting with other recipes.

The ratios look off, but this recipe is great for 2 people for breakfast. Coconut flour is a very thirsty flour, so it does need that high a ratio of eggs and milk. They are still light and fluffy, but a little grittier than normal pancakes.