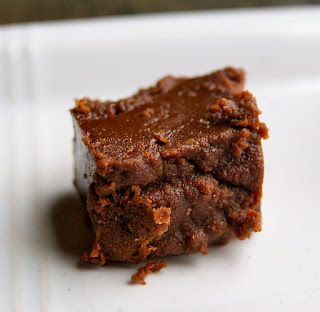 I have fond memories of a chocolate shop in Provincetown at Cape Cod when I was in high school. I ended up at the beach with a group of friends. The air was golden and the candy at the shop was plentiful and reasonably priced. They made a great dark chocolate and a particularly great peanut butter fudge. I remembered that's where my infatuation with fudge started. I can get the flavored ones like mint chocolate or orange or cheesecake other places, but I've never had a fudge I liked as much as the simple dark chocolate and this candy store.

I tried making my own and though it still needs work on technique, it was better than I expected for a first attempt. It occurred to me that the sheet pan I was using needed to be colder when I poured the chocolate onto it because the fudge ended up a little grainy. Overall, the flavor was bitter, not to sweet, and very creamy. It's perfect for either the holidays or a great day at the beach with the sand between your toes.